After boot camp and initial Electronic Warfare Operator schooling, my first fleet command was the Forrestal Class super carrier USS Ranger CV-61 home ported in San Diego, California in 1988. I will never forget thinking how large this ship was when I crossed the Coronado Bay Bridge and saw her for the first time dockside at North Island Naval Complex. The ship was unbelievably massive, just over a thousand feet long. 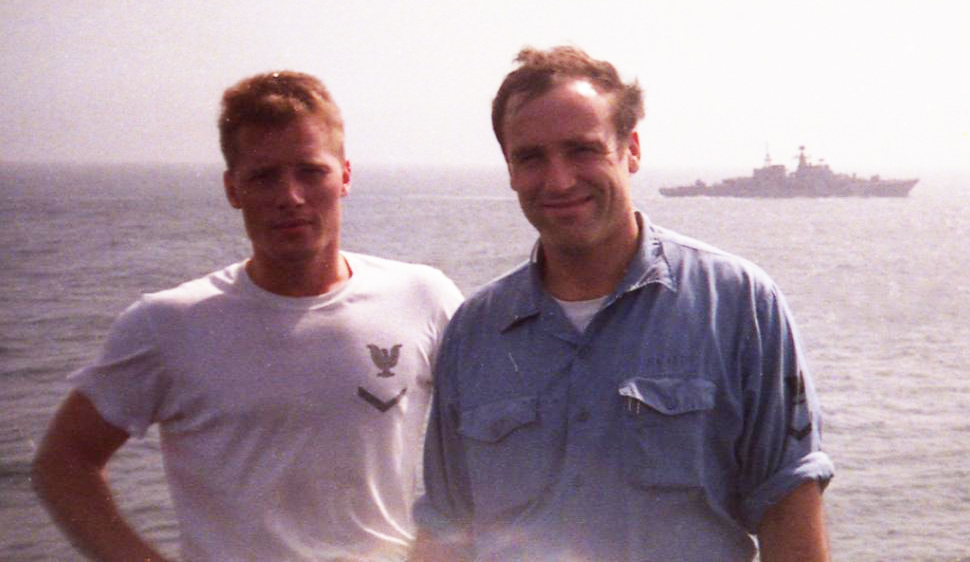 Once checked onboard, I quickly began learning the ships Chain of Command, my duties, and working towards integrating with our team of EWs. They were active in readying for a six-month deployment to the Western Pacific and all the way to Gonzo Station (Gulf of Oman Naval Zone of Operations) in the Indian Ocean. One of the first basic needs I was concerned about was food.  The chow was not good in boot camp and marginal to fair at Corry Station (Technical Training Center). In port there were about 3,500 Navy personnel stationed on the ship, and they served chow for 4-6 hours a day, including midnight rations. When we were underway with the air wing onboard, the number swelled to almost 5,600 personnel. Underway with air wing operations and all ship borne departments running continuously, they served chow twenty-two hours a day! We had a forward galley that served fast food (burgers, hot dogs, corn dogs, fries, etc.) and the aft galley served your typical meat and threes. In the mornings, you could order fluffy omelets and eggs and in the evening, steak and lobster, sometimes once a week. Roast beef, center cut lamb chops and poultry were normally on the menu. You could help yourselves to seconds and thirds  the chow never ended, and it was excellent. Only when we were west of Hawaii, steaming towards Gonzo and back, it was goats milk for five months (strawberry, chocolate and vanilla flavored). It was also good to know someone on the mess deck; you never knew when you would need a hook up. In the Indian Ocean, the sharks were easy to catch if you could get your hands on a pot roast and have the machine shop make a very large hook and attach to the fantail winches.

An interesting responsibility was populating the database on the interface computer for our brand new early warning receiver system AN/WLR-1H (V). This mainly involved loading all radar and emission parameters for potential platforms that we may encounter in our operating area. The AN-WLR-1H (V) as www.fas.org says, This system included over-the-horizon cued detection, classification and targeting area surveillance as well as threat warnings and emitter tracking. This receiver system could capture active signals in the 500 MHz to 20 GHz range and included parameters such as frequency, pulse width, band width, etc. Since most Soviet cruise missile guidance systems had active radar with home-on-jam, we would definitely want to detect them in the active radar phase. Otherwise, we would be limited to defensive measures such as Mark 36 SRBOC chaff and Close in Weapons Systems (Phalanx CIWS by Raytheon). If time allotted, we would active jam with a legacy radiation system producing one Mega Watt that would sauté enemy onboard electronics or missile guidance systems.

Our main working environment was located in Combat Information Center, the head of the tactical offensive and defensive decisions for the battle group. We had a large safe in our module that contained the latest data on emitters and platforms of most all countries for the world. These emitters included both threat and friendly emission parameters and would tie them to a platform so you know what to correlate the signaling to. Among many other active systems, it was possible that we could encounter weapons and navigation systems onboard many Soviet platforms including the daunting Kirov Cruiser, Udaloy Destroyers or worse a Delta IV or Typhoon SSBNSubmarine . These were merely a few of the potential grave threats we would be preparing for and each could inflict catastrophic damage to our battle group and affect our objectives. We also prepared for another primary threat and that was the Chinese Navy. They had a potent arsenal of submarines and surface combatants but they also had a respectable airborne and surface to surface missile threat for our picket (perimeter) ships. We would cruise well within strike range from China since we visited the Philippines, Thailand, Singapore and more importantly Hong Kong which was 37 miles from her coast. Our cruising strategy typically involved being surrounded by our battle group and they acted as a first line of defense to protect the mother ship (carrier). If they could not defeat the threat we expected them to take the hit to ensure the integrity of the mission was not compromised.  When ordered, the mission is to deliver ordinance to the enemy target.

An interesting occurrence in the South China Sea and neighboring oceans that we would regularly see were Chinese ships disguised as nonchalant vessels. A proven example were fishing trawlers with their outer decks operating as such but inside, it was a very sophisticated network of onboard radio receivers as well as video and photography systems following us, listening and picking up our dumped garbage and sifting through it. On the carrier, we had a burn room where we incinerated all information and data that was on paper. Even our POD (Plan of the Day) with activities, movie schedules and chow hall selections were burned. We also had strict radio regulations and all data transfers involved consistently changed encryption methods. I suppose it was a waste of time for them but they did see and record our flight operations, and likewise, I imagine that they only dreamed that they had the knowledge to build such a ship that could launch more than just vertical harriers and choppers.

We constantly trained and rehearsed maneuvers, practiced our threat assessments, readying ourselves for possible underway adversaries. One morning while on station in the Indian Ocean, we received intelligence that we would have a possible encounter with a Soviet surface platform. To my amazement, came the radio transmission from the E2C-Hawkeye EWs on station saying we had a Sovremenny class destroyer heading our way. It was the Soviets primary anti-surface warship having the standard quad tubes both port and starboard that contained the SS-N-22 anti ship missiles. A mach three speed with lethal results, we did not antagonize her. We prepared our receivers and listened for any emissions that could be out of the ordinary. We detected her navigation radars and other systems but never detected a threat emit from her fire control systems. We EWs were at the ready and were cautiously looking for any detection of fire control/target acquisition systems in case we had to react with various countermeasures. The Sovremenny eventually came up on our port side, just a few nautical miles out. And we sailed together for a brief moment of tension. After I went to the flight deck to have a picture taken, she simply steamed away from us, slowly disappearing over the horizon. We listened to her signals for some time until she was out of receiver range. Intelligence later updated us on her path to Petropavlovsk-Kamchatskiy (home of their strategic Pacific nuclear fleet).

On deployment, we also detected multiple Russian Tu-95 Bear maritime surveillance and ASW (Anti Submarine Warfare) aircraft and also the Tupolev Tu-160 Blackjack long range bomber. They were always being escorted away by our squadrons of F-14 Tomcats. The Blackjack bomber variant was capable of carrying the nuclear warhead tipped AS-15 Kent cruise missile. This would prove disastrous for battle groups if not quickly defeated by surface to air missiles and EW countermeasures.

Even though we detected many threats on cruise and saw a few as well, I never felt that we could not handle any adversary that attempted to threaten us. Our six month objectives were completed successfully and they mainly included maintaining safe and secure shipping lanes and a forward projection of our military capabilities if summoned by President George Bush Sr.

In my next blog, I owe the USS Ranger the respect of telling you about her history, specifications and her capabilities. Feel free to share your military experiences in the comment section.

From #AI to #blockchain to #digitaltwins, #IoT is being used to support the #COVID19 vaccine #supplychain. https://zd.net/2LZqaEL