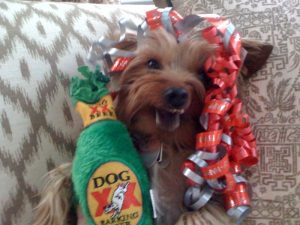 We just celebrated the 4th birthdays of Cappy and Doc the office Yorkies! The boys are 28 now, quite the party animals. With every birthday, I like to take time to reflect on the decision I made to acquire my crazy little babies.

Friday afternoon, before the St. Patrick’s Day festival in Columbia (SC), I met two little Yorkshire Terriers in a church parking lot in Anderson. They were the last two of a litter of four — the girls had already been adopted. With the intention of taking only one home, I evaluated the two tiny black and gold fur balls as they tumbled around on the ground. The way they played together was an everyday occurrence for them, but unbeknownst to me, would become the norm for us. Cappy, or the Captain, was tiny, feisty, and cute. Doc, or the Doctor, was bigger, sporty, intuitive and sweet. 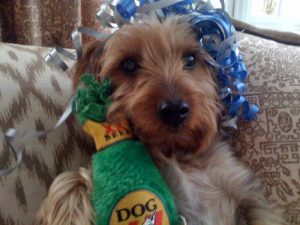 Sunday evening, on the way home from Columbia, I decided to buy BOTH of them. Agreeing with my mom’s idea that two dogs could survive me better than one (at least they had each other!),  I stuck the puppies in my car with a bed and a bag of dog food. They were temporarily titled “big” and “little”. As they cried on the way home, I wondered what I had done. I was in no position to take care of puppies in a condo and with a new job.

Cappy and Doc were named for my grandfather, Dr. J.T. O’Hanlan, a surgeon and captain in the Navy. When I was growing up, he had two schnauzers that I loved and we had several dog jokes between us. Aside from calling me “Swannie,” I was his “grand-dogger” and he was my “grand-doggie.” There is so much to tell about Treacy O’Hanlan, like the fact that he was the first capital investor in Sealevel in 1986, but for now it’s that he was a true original, my favorite person, and therefore my puppies’ namesake.

Four years later, I have become the director of my department while my dogs have become the office pets. In that time, we’ve gotten married; I wouldn’t call my husband a “dog person” but he came around. There’s a viral email about a dog not living as long as a person because it takes less time for them to discover the meaning of life and to love unconditionally. I hate receiving the email because I read it and cry. It’s so true — dogs are loving and forgiving. An artist friend of mine, who’s a Bob Jones University graduate and her father was a Baptist minister, told me that the love that her pet, Elsie, exemplifies is God’s love. And I think that she’s right. If I had it to do again, I wouldn’t change a thing, except that I would consider adopting a sheltered animal.

So raise your Dogs Equis to Cappy and Doc! Long live your best friends.

#IIoTintegration enables companies to adopt #predictivemaintenance, improve efficiency and realize new revenue streams. But first, there are some hurdles to overcome. https://bit.ly/3awl38w

Do you like milk with your serial? Sealevel does! @AfimilkLTD has been a global technology leader for the modern dairy farm since 1977. They use our 2402 and 2107 USB serial adapters to keep the milk flowing. https://bit.ly/2Jn59Qe