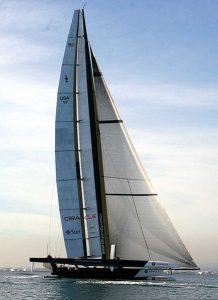 In 1851, The New York Yacht Club challenged England’s Royal Yacht Squadron for the “R.Y.S. £100 Cup,” one of several trophies made in that time period. The New York Yacht Club’s lone schooner America solidly trounced a fleet of British schooners and cutters in the 53 mile race. Because of the superior technology used in the design and construction of the America, the second place yacht crossed the finish line with an 8 minute split. The £100 sterling silver trophy was then dubbed America’s Cup in honor of the original victor, with the regattas held to defend the trophy using the same name. For almost 160 years, the cup has been fuel for the fires of innovation. The New York Yacht Club successfully defended the cup for over 130 years, and since 1983, the cup has changed hands a number of times. Innovation has not shown the slightest signs of slowing, if not increasing dramatically. Earlier this year, BMW Oracle successfully won the cup for the Golden Gate Yacht Club using what is one of the most technologically advanced yachts in existence, the USA 17.

Until recently, software engineers had little to no impact on high-performance sailing outside modeling and monitoring of environmental conditions. But all that has changed and flown largely under the radar on the USA 17. The USA 17 used not a traditional soft sail, but a rigid wing sail. This was not a new technology in itself, but was built on an unprecedented scale: 190 feet tall, almost the total wingspan of a Boeing 747. This made controlling the sail by traditional means extremely difficult if not impossible. In the end, the sail is divided up into 9 independently controlled sections in order to minimize stress on the structure of the wing while simultaneously maximizing power output. Here is where the software engineers come in. In order to control the sail, as many as 26,000 data points per second are being recorded from pressure sensors, gyroscopes, and other types of sensors. Many of those inputs are being analyzed in real-time and used to make corrections to the configuration of the wing’s sections. Some sensors are being used to determine whether various components are working properly, have failed, or are close to failure. This capability has proven invaluable not only during the design phase but also during training and racing. In fact, the edge provided by USA 17’s top-notch technology allowed the team to beat the competitor Alinghi 5 by a whopping 15:28 minutes seconds on a 40-mile course.

Real-time analysis of data in sailing is very exciting for someone who has an interest in both the sport of sailing and software control of mechanical devices. I look forward to watching the developments in the technology used for the next Louis Vuitton and America’s Cups.

#SmartCities that repair themselves without human input might sound like something out of science fiction. But Leeds may be the first to succeed by 2035. #drones #SelfRepairCity #Leeds #perchandrepair #EPSRC https://bit.ly/3cMvm6z