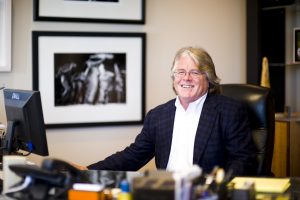 Nancy Haselden, SIBF Executive Director, explained, “The Allan J. McDonald award recognizes a member who has demonstrated outstanding international entrepreneurial effort. Tom O’Hanlan epitomizes the spirit of entrepreneurship for which this award was created. Tom has been an active member, supporting both international and local programming, since he joined SIBF in 1999, and we were honored that he and Susan could attend our recent annual meeting to receive this prestigious award.”

The award is presented to an SIBF Fellow who has demonstrated an outstanding international entrepreneurial effort. Past winners from South Carolina include Brice Bay of 10Best, Inc.; Marty Brown of Colite International, Inc., Carroll Rushing of Shasta Enterprises, Inc.; Bill Masters of Kinetixx, Inc.; and Jerry Barber of Sunbelt Capital, Inc.

“A great portion of SIBF members are successful entrepreneurs who have built or governed their own companies and understand the significance of creating and managing corporate and professional entities both domestically and internationally. Tom epitomizes the spirit of SIBF through his very successful company, Sealevel. His receipt of the Alan J McDonald award for entrepreneurship was our organization’s recognition of a true entrepreneur,” noted Gary B. Wood, president of Concorde Companies (Dallas, TX) and fellow SIBF recipient of the award.

Founded in 1986 by Tom and his wife, Susan, Sealevel provides innovative, reliable hardware and software products to enable computer connectivity and control. With more than 300 standard I/O products, the company constantly develops new products that leverage emerging technology. The company’s customer base ranges from Fortune 500 companies to militaries around the world.

In 1984, O’Hanlan designed the first RS-422/485 communication adapter for the IBM PC. In 1985, at the age of 30, Tom was granted the first of two patents: the first was an error detecting system (US Patent No: 4,513,420), and the second patent, awarded in 1997, was a communication device for transmitting asynchronous formatted data synchronously (US Patent No: 5,689,643). Along with his mentor and industry expert, Jon Titus, O’Hanlan also co-authored Digital I/O Handbook" href="https://www.sealevel.com/product/ref101-the-digital-i-o-handbook-a-practical-guide-to-industrial-input-and-output-applications/" target="_blank" rel="noopener noreferrer">The Digital I/O Handbook: A Practical Guide to Industrial Input and Output Applications.

Sealevel Systems, Inc., is headquartered in a newly renovated 48,000 square foot facility near Greenville, South Carolina, employs 50 people, and contributes to a number of charities including Helping Hands, United Way and local schools.

O’Hanlan is an avid reader whose intellectual pursuits have led him to wood working, motorcycling, music production, boating, bird hunting, and most recently tree farming. He is the proud grandfather of Brooks, Marleigh, and Baby Beasley (due in December). In his spare time, he enjoys travelling with his wife, playing the bass, and developing his 400-acre Mill Pine farm.