I’ll never forget my first trip to Special Operation Forces Industry Convention (SOFIC) in June 2009. It was held at the Tampa Convention Center located in beautiful downtown Tampa, Florida, just beside Harbor Island. The show hall was 300,000 square feet and filled with companies offering Spec Ops products and equipment. Sealevel was there to promote our products to other vendors, interested customers, but most importantly, our Armed Forces Special Operations groups.

At the show, I spoke with many Special Force individuals from all branches of service and all ranks up to full Colonels, Commandants and Captains. I even saw Admirals and Generals walking about the conference. On my third day in our booth, I saw a distinguished looking soldier coming down our aisle. He was in his formal dress uniform, and he had an interestingly proud look about him that was commanding attention. He looked like someone that I would enjoy meeting. I stepped out into the aisle when he approached, so I could introduce myself and our company. He showed genuine interest, but quickly apologized that there were not more service members at the event. Apparently, there were many that did not get a notification, and he said he would make sure that they were available for the 2010 show. We made small talk about the event and attendees, but before I knew it, he was off to meet other high ranking officers down the aisle. His identity remained a mystery.

A year later I also attended the 2010 SOFIC convention. On the second day of this show, I was talking with Marc Foster, our government sales director, about some of the interesting things we had seen so far. A moment later, I noticed a familiar face. It was the same soldier I had seen the year before, but this time he had multiple people with him, hanging on his every word. Who was he? 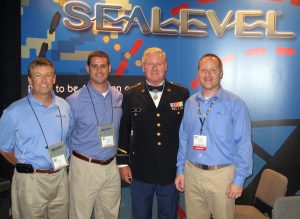 I waited for the right moment, and then I introduced myself telling him that I remembered him from the year before. This time I asked him his name and his military involvement. The people around him proudly smiled and looked at him, waiting for the delivery. He said, “I am Sergeant Samuel Davis, Congressional Medal of Honor Recipient.” Needless to say, I was stunned, quickly regrouped and enthusiastically thanked him for serving our country. He humbly said, “All the soldiers deserve the thanks. If everybody does their job, the job gets done.” They were simple but powerful words. I asked if I could introduce him to Marc and Earle in our booth and he was more than happy to spend a few minutes talking to them as well as posing for a picture with us. After Sgt. Davis left us, we talked in disbelief about who we had just met. Later, we learned his military story.

The Story of Sgt. Samuel Davis
Sgt. Davis was stationed west of Cai Lay, near the southern tip of Vietnam. The incident happened on the night of November 18, 1967 in a wetland along the Mekong River. He was a cannoneer, a member of a forward artillery group at a remote fire support base. Their mission was to provide artillery support for the infantry fighting to push the Viet Cong over the border into Cambodia. In the middle of the night the swampy base came under heavy attack from mortars and by over a thousand Viet Cong soldiers. They had advanced within 25 meters of the artillery base position. Sgt. Davis held them back with machine gun fire as the unit attempted to bring direct artillery fire to the enemy. During the ensuing battle Sgt. Davis was wounded multiple times. With a broken back, his kidney perforated and various flesh wounds, he courageously disregarded his condition and continuously attacked the enemy with his 105 mm Howitzer. Sgt. Davis fired beehive, phosphorus and a final propaganda filled round into the mass of VC soldiers. During this he also carried three wounded men to safety. His unwavering heroism eventually stopped their advance and caused them to retreat.

Learn more about the Congressional Medal of Honor Society

I often think about the brave men and women who have served and sacrificed for our nation. There is no question that serving her is one of the most gratifying things that a person can achieve and later reflect back on. Standing and speaking with such a brave and fearless soldier was unbelievable and inspiring at the same time. His legendary actions of heroism are something that our country should be immensely proud of, and I once again say to Sgt. Davis: Thank you for your incredible service to our country.

#AI is being used to find unofficial roads in the Amazon #rainforest and combat #deforestation. https://bit.ly/3buFjsx #ForestryFriday #logging #mining #biodiversit