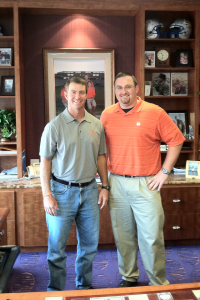 As we say our final goodbyes to summer and autumn brings with it cooler temps, changing leaves and a new school year, we have begun to prepare ourselves for another football season here in South Carolina. With the lack of any professional sports teams in our state, most of us gravitate to the college ranks in search of a favorite football team to support at a very early age. Although parents are often the most influential individuals during the selection process, it is not a decision to be taken lightly, as one’s allegiance to a particular university will inevitably decide his/her favorite aunts or uncles, best friends, career path, and the dominant colors within a wardrobe. Not unlike many other states, the fan base of South Carolina is distinctly divided between two schools: Clemson University (Tigers) and the University of South Carolina (Gamecocks). The rivalry has been ongoing for more than one-hundred years with Clemson leading the series 65-39-4, but it has become a more competitive matchup in recent years.

Recently, I had the distinct honor of touring the newly added WestZone at Memorial Stadium in Clemson, SC — better known as Death Valley to the Tiger faithful. Over the years, Death Valley has encountered various updates and additions to create a more fan-friendly environment and the WestZone is no exception. The new state-of-the-art facility adds additional premium seating, updated lockers rooms, modernized training equipment, high-tech film rooms, and showroom-quality offices/lounges for both coaches and players. These amenities afford the football program with more opportunities to recruit incoming athletes at a high level as well as providing existing players with all the tools needed for success. All of this effort helps Clemson 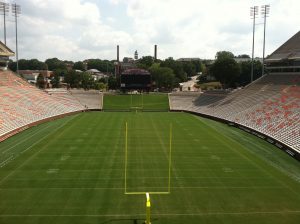 University, a school of less than 20,000 students, compete with the larger, wealthier universities throughout the country. Our tour of the WestZone was concluded with a speech and office tour from head football coach, Dabo Swinney. Coach Swinney is a fiery competitor both on and off the field, and he exemplifies the struggle of “the underdog” in athletics and in life. His story has been highly publicized, intentionally, so that everyone may look to him as an example of how success can be achieved by overcoming any obstacle that life may present. If you’re wondering why he’s called Dabo, read the story here.

Aside from Dabo’s knowledge of football, coaching techniques and superior recruiting ability, he is so much more than just a head coach: he’s a Clemson guy; he’s “all in” (a motto he coined to express the importance of teamwork to players, coaches and fans); he’s a family man; he’s an inspirational leader; and most of all, he’s the man in charge of creating a culture of togetherness at Clemson that spans all throughout the upstate of South Carolina. Whether you’re a Tiger or a Gamecock or anything in between, it only requires a few minutes in the presence of Coach Swinney to understand that his goals at Clemson extend much further than those achievable on the playing field inside Death Valley.

Dabo’s vision at Clemson is one that has been mirrored by the O’Hanlan family here at Sealevel for the last 25 years. Sealevel is located in the small town of Liberty, SC, just 14 miles from Clemson University, and we have continuously contributed to the betterment of our community through charitable giving programs designed to assist those in need. One of the most recent programs to receive local support from Sealevel and Clemson University is called, The Family Effect. In fact, both Dabo Swinney and the president of Sealevel, Ben O’Hanlan, now serve on the board of directors for the non-profit organization. Its mission statement is as follows:

The Family Effect works to reduce addiction as a leading cause of family collapse and harm to children in South Carolina. Because addiction in the home is a bottleneck issue – nothing good can happen for the family or the children while addiction is present, no matter how much government or nonprofit intervention is aimed at the household. But when the bottleneck of addiction is removed, all kinds of good things start to happen on their own. Parents work more, and take better care of their kids. There is more money in the household, and more food in the refrigerator. There are more books, more toys and more smiles.

Given Dabo’s story and his family’s struggles with addiction throughout his childhood and beyond, The Family Effect holds a special place in his heart as it works to prevent others from being subjected to the types of challenges he has encountered throughout his own life. Through continued community support and awareness, Sealevel and Clemson hope to play a major role in the success of The Family Effect and their effort preserve the value of family.

So, if you find yourself in Upstate South Carolina during the fall months, make sure you add a few items to your to-do list: drop in for a tour of Sealevel, take a scenic car ride along the Blue Ridge Parkway to appreciate all that nature has to offer, and make your way over to Clemson University for a home football game. If you have never witnessed the Tigers rub Howard’s Rock and run down “The Hill” in Death Valley, you’ve missed an opportunity to experience one of college football’s greatest traditions. Brent Musburger, broadcaster for ABC Sports once said, “When Clemson players rub that rock and run down the hill, it’s the most exciting 25 seconds in college football.” Mr. Musburger, I agree!

How do we give computers a brain? One method is the #NeuralNetwork – a net of nodes that fire like neurons. #DeepLearning #MachineLearning #ArtificialIntelligence https://bit.ly/3i74bGt