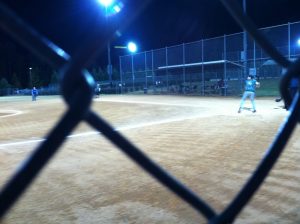 Sealevel often fields a co-ed softball team to participate in a local league. This year was no exception as we were able to recruit quite a number of Sealevel employees for the team. The league is fairly competitive, and we are fortunate to have enough athletes on the Sealevel payroll to field a solid team most every year. Our season has just recently come to a close, and we were undefeated throughout the regular season of play, finishing with a record of 12-0.

Upon completion of the regular season, there was a double-elimination playoff tournament, in which, we encountered an early loss. With our backs against the wall, we managed to claw our way through the losers bracket to face the only remaining team without a tournament loss. In order to claim the trophy, we had the unenviable task of defeating an unbeaten team in consecutive games. Although we had beaten this team a couple of times in the regular season, they were a very formidable opponent. Still, the Sealevel team was ready to play and we put seven runs on the board in the first inning to jump out to a commanding lead, which proved to be more than enough as we cruised to an 11-4 victory to force a single-game playoff for the title.

Game two was a bit more competitive as both teams went back and forth scoring runs until we finally reached the last inning down 11-9. We quickly got a couple of batters on base with no outs and eventually drove one run in to make it 11-10 before receiving two quick outs. With two outs and two on base, as fate would have it, our best hitter stepped to the plate with a chance to win the game for us. He connected with a solid swing and drove the ball nearly to the fence, but alas, it found the glove an opposing outfielder and our season was over.

Although nothing short of a championship trophy would have truly been satisfying to our Sealevel group, we gave it everything we had and had a lot of fun doing so. Forever the optimists, our team concluded with the simple phrase, “There’s always next year!”

In the wake of #COVID19, the demand for #virtualreality is surging in the need for escapism, therapy and business operations. #virutalnotviral https://bit.ly/2ADi92B

Blockchain Part I: What Is Blockchain?