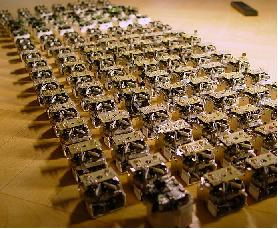 From Alan Turing to Deep Blue and Watson, humans have been trying to create smarter algorithms since computers were invented. There has been much success in the field of artificial intelligence, but lately the focus has shifted from making a single, hyper-intelligent AI program to making smaller, compact devices that on their own have seemingly no intelligence, but when gathered into groups they begin to exhibit a higher intelligence. This focus of AI is called “Swarm Intelligence” or “Swarm Theory.” Craig Reynolds had the first breakthrough in this focus, and his algorithm was called Boids. Boids entities are only aware of their immediate surroundings, and operate on only a handful of very simple rules, such as keeping at an ideal distance from its neighbors, and attempting to match speeds with its neighbors. The result is an astoundingly realistic representation of the way fish school and birds flock, and it is the basis for CG effects in many movies.

Other more recent forays into swarm intelligence have produced highly effective search algorithms, often imitating the behavior of bees and ants, among other results. Since swarm intelligence is highly parallel by nature, the field has seen a boom with the relatively recent advances in multi-core and many-core computing. The most recent advances in the field are actually in robotics due to the advances of compact, low-power computing devices. Researchers at the Swiss Federal Institute of Technology have developed a swarm of quadrocopters that built a tower out of foam blocks autonomously. More recently researchers at the University of Pennsylvania have been able to fly similar quadrocopters in formations. Finally, there is a concerted effort in the UK to develop modular robots that can rearrange themselves to better perform the task at hand.

I foresee some of the most advanced technology coming out of the public’s fascination with robots, and the research community’s trending toward parallel-computing solutions. I will personally be keeping my eye on advances in this field, if only to prevent swarms of evil, self-replicating modular robots from taking over the galaxy.