Sunday, July 22: Meet Me at Dulles

I flew up from Liberty to Dulles. Met everyone at 4:00pm. Looks like a cool group. We had dinner with leaders and speakers. They talked about how great today’s soldiers are and how they need us to keep the quality up in the military. 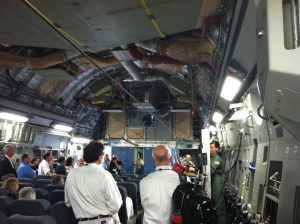 Up at 5:00am. We met at 6:00am for breakfast and then rode in a police motorcade to the Pentagon. We are two star generals—it’s called the protocol rank.

The speakers at the Pentagon, very enthusiastic and young warriors, patriots and volunteers were excellent. We toured the Pentagon and saw the memorial to 9/11 victims. Then we were bussed to Andrews Air Force Base to board the C-17 to Nellis AFB in Arizona.

Wow! A big plane, normally set up for cargo, has airline seats set up for us. There are also two huge air conditioned Porta-Johns that slide in and bolt down.

The group is real cool—all different folks—a lot of educators, media, Chambers of Commerce types, a few tech guys. Mainly, we are people with an audience back home.

I witnessed a midair refueling KC 135 to our C17. Unreal precision!!!! 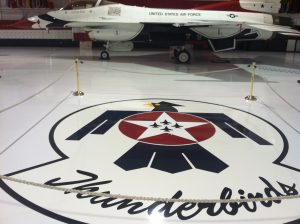 When we arrived at Nellis Air Force Base. we saw jets, helicopters, operation centers, and RPA (remote piloted aircraft or drones). Some of the most awesome things I’ve ever seen. Dinner was hot dogs and hamburgers at the Red Horse Construction group. They can build anything anywhere anytime.

There are UAE and Columbian Air Forces here with our Air Force. We watch from the ops center, which shows the fake battles between the Red and Blue teams and their progress.