I had the honor of participating in the Joint Civilian Orientation Conference (JCOC) last month. The program is sponsored by the Secretary of Defense for civilian public opinion leaders interested in growing their knowledge of the military and national defense issues. JCOC is the oldest existing DoD outreach program having been held more than 81 times since its inception in 1948. Below are memories from my week with the JCOC. You can see photos from my trip in our Facebook photo gallery. 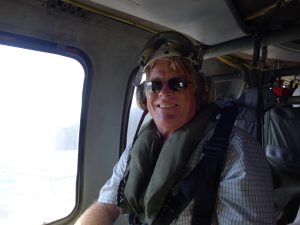 In San Diego we landed and toured the Navy base in Coronado. We boarded the USS Makin Island, a new helicopter carrier and amphibious landing craft for the Navy and Marines.

The ship sailed out to the Pacific Ocean. We saw the San Diego bay, the Hotel Del Coronado and lots of jet skis. There were several security boats to escort us out to sea. We barely fit under the bridge! We spotted sea lions and whales swimming in the ocean.

We had lunch on the ship with the captain. The ship has a “deep well” that they can flood to allow hovercraft and other boats to enter and exit. We left the ship in SH-60 choppers and that was totally awesome!

I got a coin from the captain right before we left the boat and that was really cool. I, of course, traded him some fine Hemingway cigars.

Next we toured the sub recovery center. They can go to 2000 feet depth and rescue passengers off of a sunken sub. Got a coin there as well.

Then we had a reception at Point Loma. It was nice—cocktails and heavy hors d’oeuvres. I talked with a number of Marines. That was really cool. Then back to the W Hotel to get some sleep.