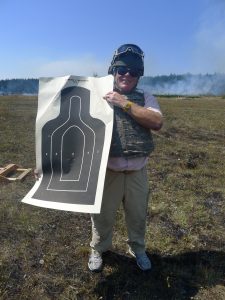 We got a 4:00am wake-up call and then went to the Marine recruit entry station. We were treated exactly like new recruits—intimidating as hell. Seriously, they gave us tons of hell. We marched, drilled, turned, and learned how to make a bed or rack as they call it. We learned orders/responses like:

Then we rappelled on the “big rope” and the normal rappelling rope. That was a new experience for most. Next was the Bayonet course. I was exhausted, hot, sore as hell in the knees from all the stairs yesterday on the ship.

Then we moved onto Camp Pendleton. We had lunch and then we met a three-star general. We shot laser-simulated M-240, bazookas, M-16s and a 50 Cal. Most people had never shot before. I had the highest score in the group with twelve kills and four vehicles blown up with a 50 Cal. 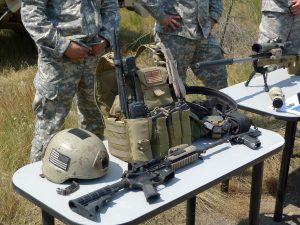 We visited the memorial garden area that honors various theater victims. We went on to the “immersion simulator,” a fake village with all kinds of simulation, avatars, sensors, simulated IEDs and video recording and playback with animatronics to teach and practice decision-making skills. I met the head tech guy, gave him a card and told him about Sealevel. He is very interested in all of our stuff to control and monitor some equipment they have in the building.

Then it was back to W Hotel and onto dinner. We had a ball at dinner—six of us and Florence. Julie had to go to the ER after bayonet course earlier. Lots of wine, good pizza and laughs.