Up at 4:30am. Took our C-17 to Seattle, and I got to sit up front for a while! Right before we took off I got a coin from the Marine commanding officer there—in exchange for two cigars, of course! We landed at Joint Base Lewis-McChord. We were supposed to fly Blackhawk helicopters to the Army demo, but it was a low ceiling that day so we had to take a bus.

We got to the field for the live fire demo. We were decked out in armor, helmets, goggles, gloves and you name it. It was hot and heavy. The armor plate probably weighed 30 pounds by itself, and it is required if live fire demo is going on. A yellow flare started the simulated battle. We watched mortar fire, sniper fire and Stryker vehicles advance with infantry shooting real ammo. Funny—it started a controlled burn in the area.

I’m really moved by all of this. I’m so proud of our country, and the 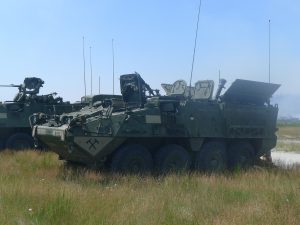 se young guys and girls. We need to take away from this what we can do to make their lives better during and after service—jobs, assistance, morale support, etc.

We ate MREs, or Meal Ready to Eat, for lunch. It was difficult to do on the ground, and my knees were hurting from previous activities. I had chicken fajita—you open the bag and get out two boxes of hydrogen heater. You add water to the heater, put it and the chicken back in the box, and in two to three minutes, it is hot enough to burn your fingers! It was messy eating with torn tortillas, so I just mixed it all up—rice, chicken and cheese. It was actually very good.

Meanwhile the fire is still burning. Small trucks with hoses going around, but not really stopping it. We met three-star General Brown. I gave him some cigars as well. We shot M4s on three round burst auto. That was really neat—real fully automatic machine guns! I shot well. 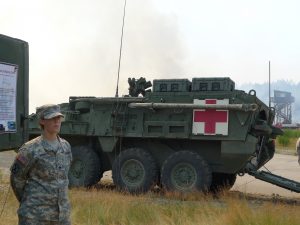 We did a walk-around looking at various army equipment, vehicles and weapon systems. We saw medical, laundry, mechanic and a bomb clearing units. There was a cool bomb detector gizmo and a classified wire detector called Goldie. The Green Beret special forces were there with AR15s, WinMag sniper rifles and M-40s. I talked for a while about my brother, Treacy (a former SF) with a guy from New Orleans.

Then we went to an Outward Bound-style team skills assessment challenge. You have to move the whole group, along with some stuff like ammo boxes and 2×6 ladders through two holes in the middle of this course. You couldn’t step on the course or on the red stripes around it. We had 15 minutes to complete it. With a little teamwork we managed to get all the way across. We were stuck at the end until Florence came up with the ultimate solution, which let us complete the course along with one other team.

Then on to dinner. We had dinner that night on base with local wives, Gold Star families (someone who has lost a family member) and several troops. General Brown was there, so I managed to get a coin from him in exchange for my cigars earlier. The salmon we had was the best ever. It was fresh Sockeye, and I asked the chef how he cooked it. He said the right mix of honey and butter. That was all. He also suggested some blackberry or Cabernet wine to give it a little more flavor. We sat with group, and met “Joe”, a seven-year-old boy whose dad died before he was born. His mother brought him up, and he received an award from Gen. Brown. It was touching.

From #AI to #blockchain to #digitaltwins, #IoT is being used to support the #COVID19 vaccine #supplychain. https://zd.net/2LZqaEL