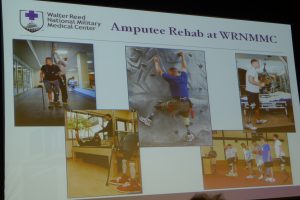 The takeaways from this trip are many. First and foremost, we have an incredibly fine bunch of men and women in our Armed Forces. Some become full-time students or join the workforce after serving our country. Others work full-time jobs, support families, and attend college simultaneously. We all should appreciate and embrace these protectors of our very being. These young men and women enlist to serve their country. Unlike previous wars, a high percentage of these patriots re-enlist more than once. They like serving, and they see the results. They are loyal and serious. We owe a debt of gratitude to them both during and after service.

Another lesson I learned is that our warriors are more than a match for any enemy they face. We utilize technology most enemies have not seen. I was told by a three-star general that it is not a “fair fight”. On conventional engagements, we can see them from above, behind and in the dark.

Former Chairman of the Joint Chiefs of Staff and Secretary of State Colin Powell has said that you can’t expect the very best out of people unless you are taking the very best care of them and their needs. This means we have to provide the very best care that we can for these folks during and after service. Good training, working conditions, equipment and supplies are just the beginning.

Medical attention after battlefield accidents is top notch. From transport medevac vehicles used to load wounded warriors to the C17 transports provide state-of-the-art medical technology and services that were not available to past servicemen. The results are lower mortality rates and a greater need for top quality prosthetics and rehabilitation facilities. On a side note, almost 25% of amputees return to active duty voluntarily. 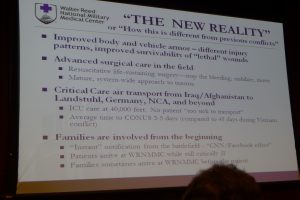 Another common ailment is Traumatic Brain Injury (TBI or concussions). Recognizing that too many concussions damage a normally healthy brain, the Army and the NFL are researching preventative measures and treatments for TBIs.

Another medical condition we learned about is Post Traumatic Stress Disorder (PTSD). Many soldiers don’t seek help for PTSD because they don’t want to admit that they have a “disorder” or they don’t want to admit to a perceived weakness. Assessment programs are in place to help the returning warrior and/or families learn more about PTSD as well as specialized therapy and other treatments to help them continue to move forward.

Another way to take care of our troops is with adequate health care. I’m told the military’s current health care program is adequate and accepted by most, but not all, providers located near military bases. In areas like Upstate South Carolina, which lack a large military population, fewer doctors are willing to accept coverage due to slow/low payments to providers.

There are numerous programs that reach all aspects of life. I’m sure I have overlooked many excellent programs and projects that exist. This blog is intended to be the starting point for a great endeavor that depends on all of us. From simply thanking them for serving to providing jobs and training programs to help them assimilate into civilian life, we can all do something for the men and women who are protecting our way of life. Get involved in the Wounded Warrior Project. Talk to elected officials about how government can improve military programs and opportunities. Our Armed Forces deserve no less than the best.

Let us all thank God for the great military that this country has, the leadership of their veteran officers, and the support of American citizens.

You’ve heard of smart cities but what about smart healthcare? It turns out both may save your life. #connectedcommunities #smartcities https://bit.ly/2TpPTHZ

Use assistive technology like a pacemaker or the humble pencil grip? You might be a cyborg! #cyborgsamongus #assistivetechnolgy #cobotics https://bit.ly/2sei3XZ

The Amazon Effect – where a customer’s needs are satisfied immediately is coming to industrial manufacturing. Not to be confused with the results of late night shopping sprees. #digitaloperations #ondemand #amazoneffect
https://bit.ly/2zUfO04