Twice as many 3D printers were on display at the International Consumer Electronics Show last month compared to the event in 2014. The emerging technology fascinates with what it can already do — from printing food, cars, and even body parts.

If you think that techies are the only ones using this technology, think again. We here at Sealevel don’t have to look far from our office in the Upstate South Carolina to see how middle school students are using 3D printers. And why not? 3D printers are a natural for STEM education, an initiative that prepares students to excel in science, technology, engineering and math.

Camperdown Academy, just north of Sealevel in Greenville, SC, provides education for dyslexic children. The school received a 3D printer through a grant a couple of months ago, and the technology has already made its presence known. Sixth and seventh grade students in David Brame’s science classes have recently designed and printed lamps to symbolize the Enlightenment, the period they’re studying in social studies.

The students have also created a number of other objects with the printer, such as:

All of the 3D printed objects have been made with PLA, a corn-based plastic that many 3D printers use. Camperdown teacher Jeremy Bullinger maintains the printer and has used it to provide learning incentives thus far. When the school hosts academic challenges, winners often receive objects created by the printer.

The middle school-aged students at the school are heavily immersed in learning science, technology, engineering and math. Engineering has been a part of the middle school science curriculum for several years (two years ago two students in Bullinger’s eighth grade class built a bridge out of ice pop sticks that held 195 pounds.) Camperdown has added computer programming to the curriculum for third through eighth graders, too. The 3D printer is another extension of the school’s focus on STEM education.

Like any new technology, the 3D printer at Camperdown Academy comes with a learning curve. During the first few months, Bullinger says the greatest challenge was figuring out the printer’s setup and which designs are printable and which aren’t. Bullinger says the most important ideas to keep in mind regarding the printer are infill and overhang. Since an object created by a 3D printer is cut into a series of thin slices, working with the printer is the best way to learn how to print objects with different fillings. 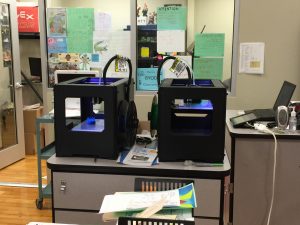 Last year, Sealevel collaborated with Manufacturers Caring for Pickens County to donate two 3D printers to Gettys Middle School in Easley, SC. They’ve already made great strides in learning how to create objects with the printer. Jonathan Scrivner, the GMS Gateway to Technology teacher, says the only challenge is designing with printing in mind. He says the trick to an easy print is making sure the object is oriented optimally to avoid unnecessary supports and to give the most stable base for the printing.

Students in technology classes and the school’s robotics club started off printing trinkets, also made of PLA, in the school’s STEM lab. After learning the mechanics of the 3D printer, they’re now putting their printers to use for a good cause. Two weeks ago, Scrivner met with representatives of E-nabling the Future, an organization with a mission to partner with schools to use 3D printers to print hands and arms for children born without any. 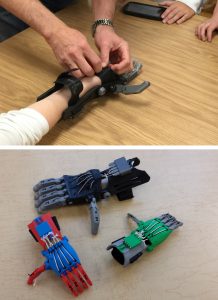 As featured on the local news, they’ve been printing and assembling arms and hands in the school’s STEM lab since. Soon, the students will use the printers to print a prosthetic arm and hand for their principal, Rick Strickland, who was born without a full left arm and hand. Mr. Scrivner says making an arm-hand combination will take some time and planning and will involve a good bit of measuring, printing, fitting, re-building and re-fitting. But he’s sure the students are up for the challenge.

Some of the students say that may pursue engineering later in life, but for now they enjoy the active learning and using the 3D printer for a good cause.

As OT and IT converge, what #bestpractices can be used to bridge the #cybersecurity gap? https://bit.ly/2OeDztz #OTITconvergence #manufacturing #operationaltech

Looking to the Future of Wi-Fi: Wi-Fi 7

The Convergence of OT & IT Cybersecurity