In January, Microsoft revealed HoloLens, a Windows 10 computer headset that creates integrative HD holographic projections right in front of your eyes. The headset’s technology “maps the room you’re in,” allowing the user to create and build in that space. The tech is even planned to be used in Mars exploration. 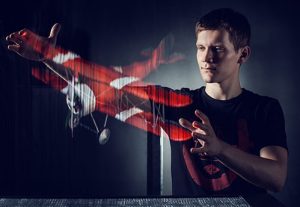 Those wishing to skip headsets or special glasses may be more interested in the suitably named startup Leia Display System. Leia hopes to create, according to their blog, “full-color 3-D images and videos that are visible — with no special glasses — from 64 different viewpoints.” At Mobile World Congress 2015, Leia caught the attention of CNN and was recognized as a Start UP Show Stopper.

A similar startup, Ostendo, is working on smartphone-projected holograms that could be ready for release as early as late 2015. Ostendo stands out because of the size of their projectors. While most holographic projections require huge hardware, this projector is tiny enough to fit in your phone. Well-funded by organizations like Darpa, Ostendo plans to release 2D displays later in 2015 with 3D displays to be released not long after.

Hologram technology also benefits the business sector. First, imagine a setup like Tony Stark’s where you can open collaborative software in any environment and create using nothing but your hands and the air in front of you. Or imagine the technology that would allow you to be visually present anywhere, instantly, via smartphone. We’re almost there!

How do we give computers a brain? One method is the #NeuralNetwork – a net of nodes that fire like neurons. #DeepLearning #MachineLearning #ArtificialIntelligence https://bit.ly/3i74bGt