So What is IoT?

Let’s start with IoT. There is some speculation about the first use of Internet of Things (IoT) as the term to describe the interworking of devices but most sources agree that it was first coined by Kevin Ashton in 1999. The basic definition is the connection of a device to the Internet and/or other devices. Today, IoT usually refers to consumer-level goods like light and temperature controls, wearable biometric devices and, of course, smart phones. Although the connectivity afforded by these devices is certainly beneficial, device failure does not result in an emergency situation. IIoT is driven by consumer-level product manufacturers and innovators.

Commentators have sarcastically joked that the IIoT (Industrial IoT) is the same as the IoT, it’s just located on the factory floor. Not quite. General Electric first used the term “Industrial Internet” in 2012, shepherding in the Industrial Internet of Things (IIoT). Like the IoT, the IIoT is the connection of devices over the Internet, but with a focus on the transfer, command and control of mission critical information and responses. The IIoT “goes to work” in fields like energy, military, public safety and transportation — where reliability and accuracy are not optional. IIoT initiatives and growth are championed by machine to machine (M2M) innovators and creators.

Industry 4.0 was introduced in 2011 as a German government initiative dedicated to ensured competitiveness for the manufacturing industry. The term is used to identify the fourth industrial revolution, preceded by revolutions in mechanical production, mass production, and information technology. While both IoT and IIoT operate at a business level, Industry 4.0 remains a primarily government and academic-based movement, with minimal private business involvement.

All three of these entities are focusing on ways to make systems faster and⁠ — perhaps more importantly — secure. At Sealevel, we stand to have the most impact within the IIoT and the trickle-down effect that has on IoT. We’re proud of the strides we have made in improving mission critical communication and look forward to expanding our reach to offer more cloud-based and wireless products. 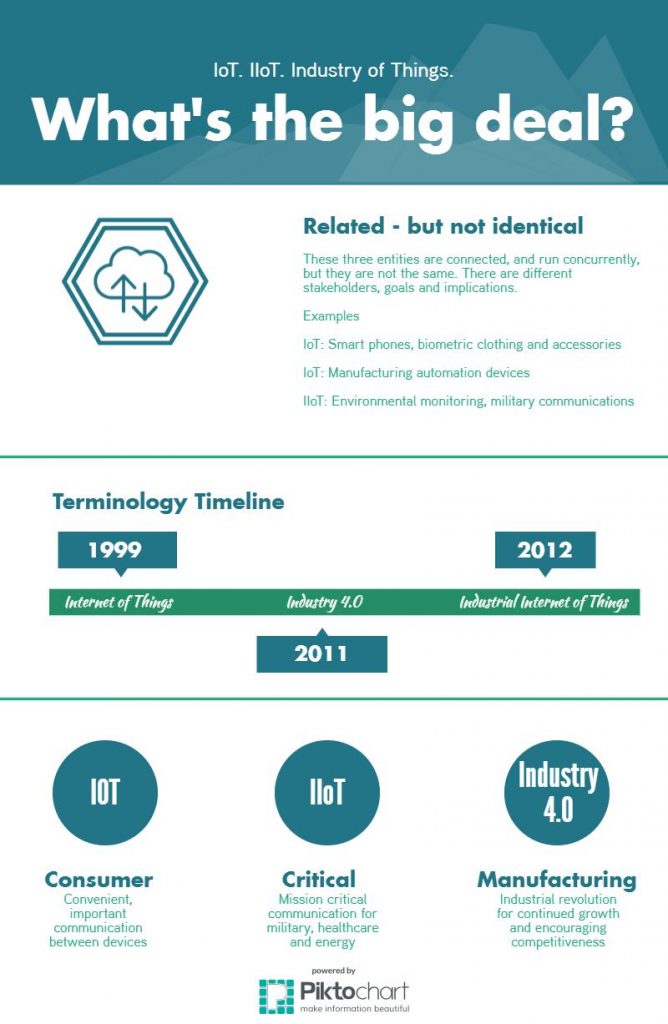