Strategically placing advanced sensors in areas of interest has changed the battlefield. Capable of signal processing, 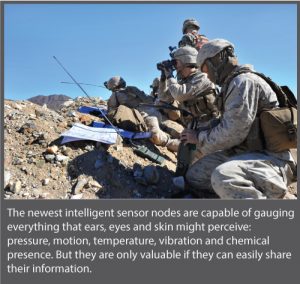 wireless communications and synchronization, these new sensor nodes collect lifesaving data. Deploying them in an Integrated Sensor Architecture (ISA) is the key to using their information for predictive services, more effective intelligence gathering and security monitoring in military operations.

What is Integrated Sensor Architecture?

An ISA is not a physical layout, but a network construction. It allows sensors to communicate needs or capabilities to other devices in a common language without physically integrating. Unlike older network models, sensors in an ISA are equipped with dynamic discovery. Dynamic discovery programming lets devices identify common protocols while communication, creating a net-centric integration of systems, and opens pathways between devices regardless of service or platform.

With this open communication, an ISA is the closest approximation of a common operating environment. A true common operating environment is a uniform software and hardware configuration. However, it’s also achievable when all devices are interoperable despite non-uniformity. Common operation is ideal for digital military engagement as it mitigates information delay by streamlining mission critical communications and troubleshooting.

Is an ISA the same thing as Edge Computing?

This sensor architecture may seem like a military edge network, but they do differ. Edge computing also refers to a physical distribution: IoT devices that carry out processing at the point, “the edge,” of data collection and actuate in the same place.  Moreover, an edge network requires a uniform, cohesive system: every device uses the same software and cloud service, reporting to a primary control. Its primary effect is on automation and therefore relies on favorable conditions, if not high bandwidth and power conditions.

ISAs, however, have a primary effect on communication efficiency, ease of access and speed. In further contrast, sensors configured in an ISA do not participate in an IoT network or process data on-site as they could be stolen, compromising sensitive situations. Furthermore, the transmissions between them are sustainable even in degraded or unfavorable conditions, functioning on low power and low bandwidth.

How does this tactical network differ from older battlefield configurations?

In traditional sensor networks, the architecture of communication was called “point-to-point connectivity.” That meant that a sensor could only relay data along a fixed, centralized pathway of points or be exclusively accessed from a local point in a unique manner. The two biggest issues that presented with point-to-point were latency of communication and cumbersome knowledge sets: preventing real time data harnessing and creating workforce skill gaps, respectively.

To illustrate the issue of centralization, consider a naval system deploying military drones for reconnaissance before deploying troops on a beach. The drones may collect climate data, tide information, survey the beach for obstacles or enemy presence and collect air samples to test for harmful chemicals in the air. Data would then be relayed by datalink to a control center on the ship. From there, it would need to be communicated to soldiers already in boats headed to the shore. If military or security personnel wanted real-time sensor data, the latency factor of communicating it to a central system before receiving it on mobile devices could dangerously affect decision-making.

The problem with localization in these outdated arrangements is the specific protocols required for access. For example, soldiers sweeping an area for evidence of militants may check buildings that could house persons in hiding. Footage and motion sensors would betray movement or images of a presence. Every team would need to have the technical knowledge to gain the benefits of sensors. On the other hand, sensors might require physical interfacing to communicate with each other and users. Without the abilities to access the archived data, those soldiers could be ambushed.

What does an ISA mean for a mobile soldier’s user experience?

As part of an ISA, user carried devices receiving information from the sensors benefit from dynamic discovery and use common protocols. Regardless of manufacturer or date of creation, these tools will succeed at picking up sensor signals, even those unknown to the solider.

They will also be equipped with a range of wireless communication methods: mesh, LPWAN, RF or data. Soldiers equipped with the right telecommunications tools — such as mobile phones or other mobile devices with encrypted military software — can query the sensors as they sweep, getting real time updates. Moreover, ISA gives users accessing the sensor data a common interface.

What’s next for intelligent sensor networks?

As electronic warfare becomes a major aspect in conflicts, implementing innovative solutions like the ISA will be an advantage over older sensor computing environments. However, an ISA is only as effective as the technology network within which it operates. Ensuring that communications layers at all levels meet standards will be a key goal for militaries and defense organizations adopting intelligent sensor networks.

The 520E is sailing the high seas as a tool to improve push-to-talk radio communications for maritime security, search and rescue. #sealevelsystems #pushtotalk #radiocommunications #ethernet https://bit.ly/3eeigD3