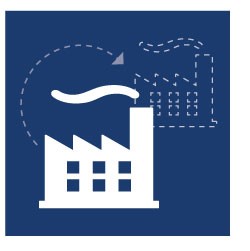 The Industrial Internet of Things (IIoT) will create huge amounts of data which can be used to improve productivity and lower costs.

This is a heartening statement for upper management who love spreadsheets, but what does it mean for the people doing hands-on, practical work? For example, what about the factory manager or technician who is tasked with keeping production running and avoiding waste?

The good news is that enterprise technology is not just for management. IIoT will create new tools that help average workers go about their jobs, and one such tool is the digital twin.

The concept of digital twins dates back to the days of the Apollo Program, when NASA was faced with a problem: their engineers and scientists were on the ground, while the Apollo craft were thousands of miles away in space. NASA created virtual models of the spacecraft, which the ground team could use to simulate scenarios and help the astronauts navigate tricky situations — such a model was crucial in bringing the stricken Apollo 13 mission home.

The term “digital twins” was coined in a 2002 white paper called “Manufacturing Excellence Through Virtual Factory Replication.” A digital twin, according to the paper, is an exact digital model of the factory reproduced on a 1:1 scale, using real-time data to ensure that the digital twin (the model) is identical to the physical twin (the manufacturing facility) at all times.

This digital twin is a powerful diagnostic tool. Digital twins not only monitor the health of individual components, they also make it easier to predict when a component will require replacement or repair by monitoring the state of the entire system.

This kind of predictive monitoring is already in use in heavy industry. For example, repairs on a gas turbine are a major undertaking — running at 3,000 degrees Fahrenheit, they can take up to four weeks to cool down enough to be repaired by an engineer, followed by another two weeks to get running again. By using digital twins, engineers can predict when a turbine will need repair and schedule downtime for a period when it won’t impact productivity. Once the turbine is down, they can also repair everything the digital twin indicates is likely to fail in the near future, maximizing the time until the next repair cycle.

That predictive ability also makes it easier to plan for the future. In a factory environment, for example, when there is an uptick in demand, the digital twin can be used to simulate an increased production run. Management can then easily see if the additional strain is likely to cause any kind of system failure and avoid the risk of breakdowns occurring.

The Future for Digital Twins

Since 2002, the concept of digital twins has mostly been just that: a concept. That’s because digital twins require massive amounts of finely detailed data.

Things have changed in the era of sophisticated IIoT networks and other data-rich technology, and now virtualization is taking off. Gartner has listed digital twins as one of their Top 10 Strategic Technologies of 2017 and stated that Within three to five years, billions of things will be represented by digital twins. Another research firm, IDC, believes that by 2018, companies who invest in digital twin technology will see a 30 percent improvement in cycle times of critical processes.

For people on the factory floor, this means that rather than relying on gauges and other visual aids, they will be using the digital twin to monitor machinery. This will require a change in skillset, with tomorrow’s technicians needing to understand data analytics almost as well as they know how to use a wrench. It’s worth it for the trade-off, however: They’ll have a better, safer work environment and machines that run at maximum capacity.