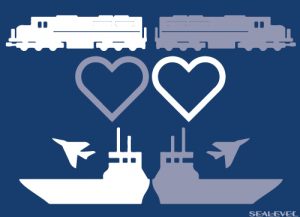 In April 2017, Sealevel published a blog about digital twin technology and the big wins it was racking up for large industries such asmanufacturing. As we enter 2018, data harnessing technology and artificial intelligence tools have allowed digital twin applications to bloom. The progress made from analog to highly effective, powerful digital twins in the last 15 years has us buzzing. These new concepts built around machine learning, increased sensor usage and cloud computing have made digital twins solutions builders for serious issues, such as dark data.

Here are three exciting digital twin solutions in healthcare, public safety and transportation that have us thinking about the edge of development.

GE uses a “digital thread” to track a locomotive from design to operation and service, digitally. The thread makes the foundation of the twin, which eventually gets filled out with historical data and analysis. These GE locomotive digital twins have information, beginning from conception, that allows engineers to make asset predictions about performance but also fuel efficiency, downtimes and maintenance. As GE builds locomotives for more railway companies, digital twin usage will lead to optimized outcomes for entire rail networks and individual lines.

Although the Living Heart Project (LHP) developed their prototype in 2015, it continues to make the news and develop. The LHP is a digital twin of the human heart. Essentially, doctors can take the biometric information of a cardiac patient — collected via biotech sensors and scanning technology — to create an individualized digital twin of the patient’s heart. The purpose of this medical device is to enhance cardiac research, create a protocol for virtual analysis of the heart and develop a system for custom therapies for heart patients that deliver care before the sickness starts. The LHP signed a five-year agreement with the US Food and Drug Administration to advance the research collaboratively.

NASA and the military have spearheaded digital twin technology from its inception in the early 2000s. However, its primary applications were aerospace and rocket-based. In this military iteration, the Aegis Combat System will have a virtual twin test the programming. As it simulates the physical system’s deployment, the twin will collect sensor data and usage statistics that can be used to predict how the Aegis would function in at-sea scenarios. The primary benefits to this twin application are precision programming and saved costs, which optimize the military budget without reducing national security. A non-twin test involves interfering with the ship’s combat system, involving more naval employees and interrupting normal operations.

As the world manages the COVID-19 outbreak, artificial intelligence is lending a hand in distributing supplies and keeping us safe. #robotics #COVID19 #artificialintelligence https://bit.ly/3bBYhu9

The Role of IoT in Global Disease Prevention