Northern Blast Refrigeration supports many trucks in cooler regions that use cold plates instead of traditional mechanical cooling systems.

Based on new FSMA regulations, Northern Blast needed a cellular solution to remotely monitor and track multiple temperature zones inside trucks and trailers. In addition to FSMA compliance, Northern Blast wanted to ensure customer products were protected and that systems were running efficiently.


“With new regulations for refrigerated trucks rolling out nationwide, cold chain monitoring is among the biggest issues we face on a daily basis. Now more than ever, proving proper temperature along the cold chain is essential and having equipment that performs flawlessly is our largest concern. The 370 has proven itself to do just that. From monitoring temperature to sending alarms, it has filled the gap that new regulations have forced all areas of the cold chain to address.”

Northern Blast Refrigeration uses the standard SeaConnect 370C along with a modified version for wet environments that features the IP67-rated enclosure.

The SeaConnect 370 is mounted inside the refrigerated portion of the truck. Connected 1-Wire temperature sensors are assigned to each zone. The device features a battery back-up that powers the unit overnight while the truck is off. The battery recharges throughout the day.

By utilizing the SeaConnect 370 and SeaCloud software, Northern Blast Refrigeration offers their customers a solution that exceeds compliance for FSMA regulations and provides real-time monitoring where it matters most. 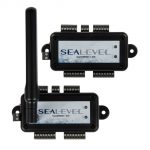 SeaCloud offers a secure, robust, scalable, Industrial Internet of Things (IIoT) software platform that is designed to monitor, track, analyze and control data from SeaConnect and other Sealevel I/O devices. Options are available for data-at-rest applications such as condition monitoring and operational intelligence as well as data-in-motion activities to provide real-time, actionable information.

Going Out of This World with NASA