Designing a computer system capable of reliable operation in hostile, sometimes remote locations requires careful attention to detail. Wide operating temperature range, vibration tolerance, and elimination of moving parts and cables are all important considerations. In fact, these topics are widely discussed in industrial and military trade publications. However, designing for tolerance to power disturbances – unexpected outages, brownouts, voltage spikes, and wide voltage ranges – can be equally vital to the success of critical applications.

Power tolerant hardware is more important than ever. Many critical applications run today on low-cost, full function operating systems like Microsoft Windows or Linux as opposed to specialized operating systems of the past. Today’s operating systems are built for generic hardware and employ many optimizations that can cause data loss and corruption of the storage disk if power is abruptly interrupted to the system. For example, the contents of several files can be “scrambled” and mixed together, in addition to some information simply disappearing. Fortunately, with proper forethought and planning, hardware designs can address this issue to improve system reliability.

It is interesting that most office computers are protected by Universal Power Supply (UPS) systems that allow the computers time to flush cached data and perform an orderly shutdown, while some industrial and military applications performing tasks much more important than office applications are often not connected to a UPS. For mechanical reasons, it may not be convenient to use a standby UPS in industrial, military, and OEM applications. Often, there just is not space and the computer might still lose power (even if just for a few seconds) if it is attached to a standby UPS that did not respond to the outage quickly. To prevent this possibility, the battery and associated electronic circuits can be included as an integral part of the system design. 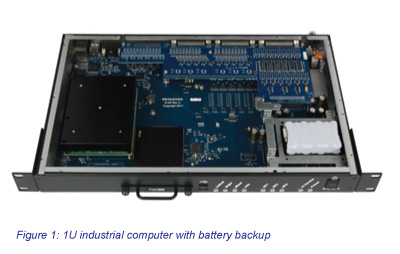 A major purpose of the computer is to monitor and record the health of radios, generators and other equipment and serve as the “last-man standing” in the wireless system for data archive in the event of a major power event. Reliability is a key requirement since these communications systems are often deployed in remote locations such as mountaintops, deserts, and swamps where a service call would be time-consuming and extremely expensive.

The rackmount computer is designed for zero-maintenance and runs on the Windows 7 OS from a solid-state drive (SSD). To avoid corruption of the operating system and possible damage to the SSD during an unexpected power outage, Sealevel designed in a nickelmetal hydride (NiMH) battery along with control circuitry for detection of power disruption and to handle the charging of the battery. During a power event, the battery circuit notifies the application program of the issue and provides 5 minutes time to allow the orderly completion of the shutdown if the event persists. The battery is designed to provide a field life of 3 years. For easy maintenance, a separate cover is provided in the enclosure top to access the battery (Figure 2). A service technician can easily disconnect the old battery and replace in less than 5 minutes. 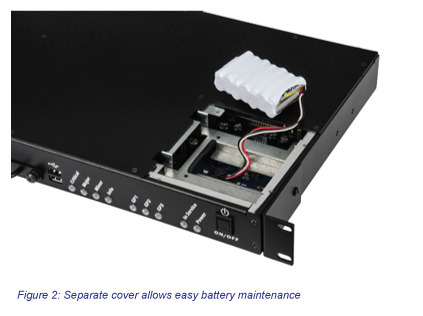 Batteries are not the only solution for a back-up power source. High-energy capacitors, or Supercaps, are an attractive alternative for applications that require a shorter hold up time. Supercaps do not need periodic replacement like batteries, and charge faster. In Figure 3, you can see how we implemented Supercaps for protecting against power disruption for a Class 1 Division 2 approved flat panel computer used on oil drilling platforms. 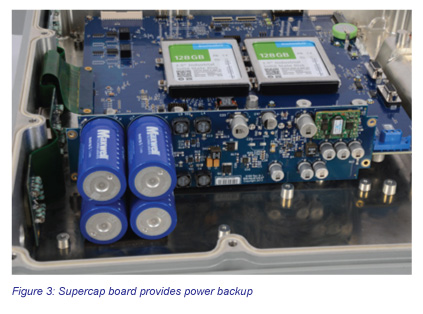 A variety of Supercaps are available offering an array of power capacity, size, and cost options, so designs can be tailored to each unique application. Recently, we worked with a company that designs automotive test systems used on vehicle assembly lines. In this case, the unit needed to operate for an extended period while not connected to a power source. However, power source also needed to be small enough to fit the mechanical constraints of the mobile system. Our designers used ten 150F Supercaps to create the compact power pack needed to fit nicely in the final portable instrument (Figure 4). 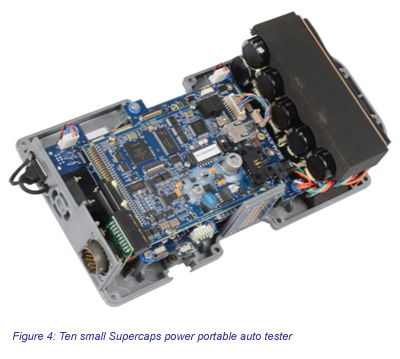 Can your application benefit from internal power back-up? There are many flexible ways to include this capability in an industrial computer design, and it can provide a new level of reliability that is well worth the cost.